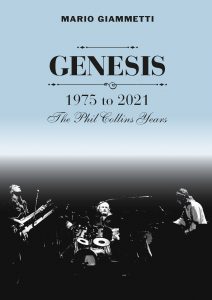 Blurb: The definitive biography of the later years of one of the world’s greatest bands. The book contains numerous exclusive interviews with band members and all of the important personalities who were part of the story of Genesis from 1975 onwards (including Ray Wilson who fronted the band for 1997’s Calling All Stations album and subsequent tour before the return of Phil Collins in 2007). The book covers the full story of the band extensively, taking readers through each album and tour. Additionally it features a number of previously unpublished photographs.

Comment:  This is the follow-up to Mario Giammetti’s Genesis: 1967 to 1975 – The Peter Gabriel Years published the previous year. I was hugely impressed with that first volume, which provided much new information on that period of the band’s history through the author’s interviews with band members and offered well-rounded assessments of the band’s output. That this new book is less successful than its predecessor may not be surprising to those familiar with the author’s love of the Gabriel era of the band. Genesis fans are often split into two camps – those who grew up with or preferred listening to the band’s progressive recordings and those who caught up with the band when they became a trio and started having hits. Whilst Giammetti recognises the strengths of much of the material from the latter period, he does not hide his disdain for certain aspects of the band’s success in the mid-80s. He has a particular dislike of 1986’s Invisible Touch album, which he describes as “the weakest album in the history of Genesis”. He laments that the album was the band at its commercial peak and disliked their use of studio electronics and new musical equipment. Whilst I have some sympathy with his case against synthetic drums (the awful Simmons kits of the day lacked player expression), I challenge his view that the songs on the album were sub-standard – he states “there isn’t a single song that is exceptional”. The album produced five top 5 singles in the US and stayed on the UK album charts for over a year. An album with that much success cannot be written off with the casualness it is here. No-one complains that The Beatles’ pop songs were poor because they were commercial hits, yet with Genesis their later albums are seen as a betrayal by fans who wanted them to carry on producing songs in the way they had done in the 70s.  This seeming prejudice aside, Giammetti does acknowledge the band could not sustain itself in a changing musical landscape by clinging to old musical philosophies and accepts the simplification of their sound as a necessity. He is much fairer, and clearer, in his assessment of albums such as Duke and We Can’t Dance. However, it is also obvious the author has personally less to say about the songs from this period in general than he did in his first volume and he leaves most of the words to the band members themselves. A lot of what they say is very interesting and there are again new things to be learned from interviews conducted directly with the author and other sources close to him. The book as a whole is generally a good companion to the earlier volume and is both informative and enlightening through those band interviews. What made the first volume so successful, however, was the marriage of the band’s views with the analysis of the author. Here, though, there is an obvious gap between Giammetti’s view of the material and that of the band. Not a bad thing in itself, but the author’s contrary views are often restricted to a couple of sentences without any real substantive analysis or insight to qualify those sentences. It sounds like I have been harsh on this book because I do not always agree with the author’s view. There is an oft-quoted saying that “opinions are like a**holes – everybody has one.” I would also add that everybody is entitled to one – an opinion that is. I would just like to see those views better expressed and rationalised. In its layout, the book follows the same template as the first volume and the sections covering the tours and the evolving set lists are well laid out. There is also exploration of the music scene and its trends to contrast with the band’s albums. This is a book then that completes Giammetti’s overview of the band and one that is welcome for that, but perhaps the definitive assessment of the band’s career, and in particular the so-called “Collins era”, is still to be written. (Note: Despite the title, Giammetti also covers Ray Wilson’s brief tenure with the band following Collins’ departure in 1996).