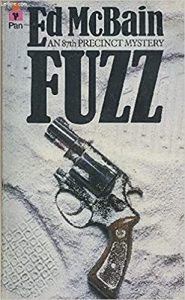 Blurb: The detectives of the 87th Precinct are confronted with a call – clearly a crank call – that threatens the life of the city’s parks commissioner unless a ransom of $5,000 is paid. The deadline soon passes and the parks commissioner is shot in the head as he leaves a rock concert. Soon, another anonymous warning follows and the deputy mayor is blown up in his Cadillac. The next target is the young, charismatic Kennedy-esque mayor who is on the hit list of what can only be called a serial assassin. It is up to the hardworking detectives of the 87th Precinct to find the shrewd murderer before he can strike again.
Comment: Ed McBain returns with the 22nd book in his 87th Precinct series following a two-year break. The book is a mix of detection, thrills and comedy, with the latter adding a delicious flavour to the mix. McBain is not afraid to show the fallibilities of his detective heroes and here they are often made to look inept by their master-criminal nemesis the Deaf Man, returning after his appearance in book number 12, The Heckler (1960). Three separate cases here dovetail through happenstance into a chaotic finale. For once the solution is not achieved through procedural detective work, it is merely resolved through blind luck. The Deaf Man’s scheme is clever and is only undone through his own vanity and bad timing. The dialogue is amongst the best in the series, notably in the sidebars: the station being decorated apple green by two painters who trade verbal barbs with the detectives; Meyer looking to sue an author who has used his name for the title of his book. The comedy is broadest in a stakeout in Grover park with Kling and Meyer dressed as nuns; Willis is a sleeping bag with female detective Eileen Burke; Genero disguised as a blind man with his guide dog who ends up shooting his own leg. That McBain juggles these elements, both serious and comic, so well is a testament to his skills. The result is one of the strongest books in the series, which would be adapted for the big screen four years later.