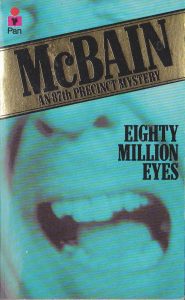 Blurb: When top TV comic Stan Gifford died there were plenty of witnesses – 40 million viewers, plus the studio crew and audience. Detectives Meyer and Carella had never had it so good, but when pretty Cindy Forrest undressed for bed, there was no one to watch – except her attacker.
Comment: The 21st book in Ed McBain’s 87th Precinct series sees McBain interweaving two separate plotlines – a traditional whodunnit mystery and a psychological thriller. The nature of the book betrays the origins of these plotlines as two separate shorter pieces published in magazines the previous year. The mystery plot, written with a light touch, concerns the poisoning of a TV comic and detectives Carella and Meyer hunt down leads through the questioning of suspects and the forensic evidence. The thriller plot has a darker and more sinister tone with a dangerous stalker menacing Cindy Forrest (who appeared as the daughter of one of the victims in Ten Plus One) and Kling assigned to protect her. Both cases work to simultaneous and satisfying conclusions. The dialogue is breezy and the writing confident, but the stitched-together nature of the stories is evident as there is no linking theme or crossover between the cases. That said this remains an excellent example of McBain’s versatility, even within the same book.