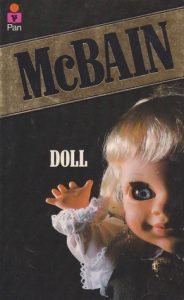 Blurb: She was a living doll–until she was slashed to death. Detective Steve Carella wants Bert Kling on the case, even though Kling is making enemies of everyone. Then finally even Carella has had it with Kling, and suddenly the detective is missing and suspected dead. The men from the 87th Precinct go full tilt to find the truth. But they really need to find is a little doll–the little doll with all the answers.
Comment: The 20th book in Ed McBain’s 87th Precinct series finds the author returning to his trademark approach, but with a new twist. Here, he weaves elements of psychological terror into the procedural narrative, with Carella captured and being forced into drug addiction and becoming a sexual plaything by a psychotic woman. The doll of the title is both the key to the mystery and a metaphor for Carella’s incarceration. The tension builds as Kling and Meyer race against time to locate their colleague, whilst investigating the murder of a model. The book can be seen as marking the beginning of a new chapter in the series with McBain pushing further at the boundaries of sensationalism – a theme he would often return to in later books. Whilst the move was bold it somehow seems to slightly cheapen the material and, as a result, the book is not wholly successful.