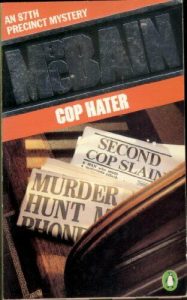 Blurb: As a cop with the city’s famed 87th Precinct, Steve Carella has seen it all. Or so he thinks. Because nothing can prepare him for the sight that greets him on a sweltering July night: fellow detective Mike Reardon’s dead body splayed across the sidewalk, his face blown away by a .45. Days later, Reardon’s partner is found dead, a .45-caliber bullet buried deep in his chest. Only a fool would call it a coincidence, and Carella’s no fool. He chalks the whole ugly mess up to a grudge killing…until a third murder shoots that theory to hell. Armed with only a single clue, Carella delves deep into the city’s underbelly, launching a grim search for answers that will lead him from a notorious brothel to the lair of a beautiful, dangerous widow. He won’t stop until he finds the truth—or until the next bullet finds him.
Comment: Along with Ernest Tidyman’s Shaft books, Ed McBain’s 87th Precinct novels were the first adult books and crime fiction I ever read. I initially read them in retrospect and out of sequence and then bought the series with each new publication from Ice (1983) onward. Cop Hater was the first book in the series, published back in 1956, and re-reading it now it is obvious to see the influence the book not only had on crime fiction, but also TV police procedurals. McBain would establish himself as a master of the format over the next 49 years with 55 books in the series. Isola was a fictional city, but in reality it was a thinly disguised depiction of New York, its geography rotated on its access and its boroughs renamed. McBain prided himself on the detail to which he captured the procedure of police detection and there is much detail in this debut book to that effect. That does not mean to say the book is bogged down by minutiae. Far from it. The book is as efficient as they come, McBain having been schooled in pulp fiction. His natural use of dialogue, including the witty banter, was to become McBain’s key calling card along with his intricate plotting and ability to create believable characters. The plot here concerns a series of killings of detectives from the 87th Precinct with seemingly no motive. McBain highlights the process his detectives go through in following leads until they come to a dead end or to the killer. Steve Carella takes the lead here, as he would do in many of books in the series. We also get to see the detectives’ home and social lives making their characters fully rounded and human. McBain would keep the series at a consistently high standard throughout, which is incredible given the volume of books he wrote. Cop Hater may not be among the very best, but it does demonstrate many of the traits that would make the series so popular and as such holds an important place in crime literature history.