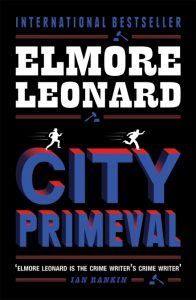 Blurb: Clement Mansell knows how easy it is to get away with murder. The crazed killer is back on the Detroit streets – thanks to some nifty courtroom moves by his lawyer – and this time he’s feeling invincible enough to execute a crooked Motown judge. Homicide Detective Raymond Cruz thinks the ‘Oklahoma Wildman’ crossed the line long before this latest outrage, and he’s determined to see that the psycho does not slip through the legal system’s loopholes a second time. But that means a good cop is going to have to play somewhat fast and loose with the rules – in order to manoeuvre Mansell into a showdown that he won’t be walking away from.
Comment: Elmore Leonard’s 1980 novel, subtitled High Noon in Detroit, presents a battle of wits between psychotic killer Clement Mansell and Detroit detective Raymond Cruz. References to the old west play throughout up until the inevitable showdown conclusion. Leonard’s easy styled prose and his command of character and sharp, witty dialogue are fully present here. It is easy to see now that Cruz was the prototype for Leonard’s popular Deputy US Marshal Raylan Givens, introduced in his 1993 novel Pronto. This has been acknowledged by the newly commissioned continuation of Fox Network’s Justified TV series as Justified: City Primeval, which is due to commence shooting soon.  Cruz’s Texas roots and his laconic approach bestow him with a sense of cool when dealing with the Detroit low-life. Mansell is an edgy villain who manages to extract loyalty from his dope-head girlfriend, Sandy Stanton. Cruz has some sympathy for Sandy and also becomes involved with Mansell’s attorney, Carolyn Wilder. Add some Albanian gangsters into the pot and Leonard mixes the ingredients with the consummate skill of a seasoned pro at the top of his game.