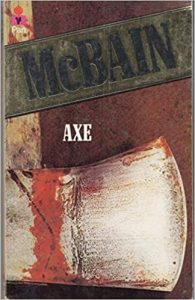 Blurb: Eighty-six-year-old George Lasser was the superintendent of a building in the 87th Precinct until just recently. Unfortunately, his tenure ended in the building’s basement with a sharp, heavy blade of an axe in his head…There are no witnesses, no suspects, and no clues. The wife and son? They’re both a little off-kilter, but they have alibis. Just when Carella and Hawes are about to put the case on the shelf, the killer strikes again. Now the detectives are hot on the trail of a man crazy enough to murder with an axe.
Comment: The 18th book in Ed McBain’s 87th Precinct is a little lacklustre after the excellent Ten Plus One. McBain seems short on ideas and the mystery elements fail to engage. By now the author was slowing his series output from three novels a year to one and he lost some momentum as a result. This particular mystery is wrapped up very quickly after following the usual dead-end leads – indeed the book is remarkably short, even for McBain at 141 pages. This being McBain, though, there is still much to enjoy in the dialogue and familiar characters, but ultimately this is a rare example of a master of his craft off his game.