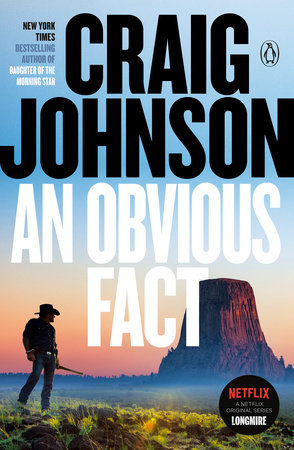 Blurb: In the midst of the largest motorcycle rally in the world, a young biker is run off the road and ends up in critical condition. When Sheriff Walt Longmire and his good friend Henry Standing Bear are called to Hulett, Wyoming—the nearest town to America’s first national monument, Devils Tower—to investigate, things start getting complicated. As competing biker gangs; the Bureau of Alcohol, Tobacco, and Firearms; a military-grade vehicle donated to the tiny local police force by a wealthy entrepreneur; and Lola, the real-life femme fatale and namesake for Henry’s ’59 Thunderbird (and, by extension, Walt’s granddaughter) come into play, it rapidly becomes clear that there is more to get to the bottom of at this year’s Sturgis Motorcycle Rally than a bike accident. After all, in the words of Arthur Conan Doyle, whose Adventures of Sherlock Holmes the Bear won’t stop quoting, ”There is nothing more deceptive than an obvious fact.”
The twelfth novel in Craig Johnson’s Walt Longmire series is an entertaining read, but shows signs of complacency setting in. Johnson writes engaging characters and witty dialogue, but there is something a little blase about the way they go about their business in this story. The humour is turned up and the thrills turned down and everything feels a little comfortable. The mystery itself isn’t as engaging as the plots in earlier books either. and the whole thing is wrapped up rather conveniently in the epilogue. That said I was never bored and this is probably the fastest and easiest read in the series – the novellas and short stories excepted – just not very challenging. Hopefully, this is not the beginning of a downward turn and The thirteenth novel, The Western Star, will be a return to form.